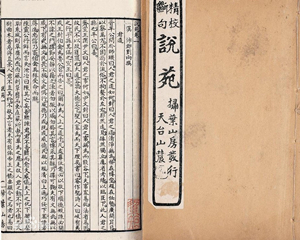 The Use of Parables

“Hui Zi is forever using parables,” complained someone to the Prince of Liang. “If you, sire, forbid him to speak in parables, he won't be able to make his meaning clear.”

The prince agreed with this man.

The next day the prince saw Hui Zi.

“From now on,” he said, “kindly talk in a straightforward manner, and not in parables.”

“Suppose there were a man who did not know what a catapult is,” replied Hui Zi. “If he asked you what it looked like, and you told him it looked just like a catapult, would he understand what you meant?”

“Of course not,” answered the prince.

“But suppose you told him that a catapult looks something like a bow and that it is made of bamboo – wouldn't he understand you better?”

“Yes, that would be clearer,” admitted the prince.

“We compare something a man does not know with something he does know in order to help him to understand it,” said Hui Zi. “If you won't let me use parables, how can I make things clear to you?”

The prince agreed that he was right.

--The Garden of Anecdotes (Shuo Yuan)