JUDY WOODRUFF: When outbreaks of COVID-19 at meat processing plants in the U.S. slowed production, American wholesalers turned to foreign beef suppliers. Beef exporters in the small country of Nicaragua were happy to fill that gap, actually ramping up production amid the pandemic. But this has come at a high cost for Indigenous communities, who are being run off their land to make way for cattle ranches. A warning to viewers: This story contains some upsetting images of violence. Nate Halverson of Reveal from the Center for Investigative Reporting is our guide.

NATE HALVERSON: That classic American meal, the hamburger, is increasingly arriving on ships. Imports of frozen beef are up nearly 20 percent since the coronavirus pandemic began slowing U.S. meat production. And one country has led that surge of imported beef. Nicaragua, that small Central American country, has become the third largest supplier of frozen beef to the United States. Its imports have reached an all-time high during the pandemic, doubling in just four years, according to U.S. import records I reviewed. But how this little country the size of Mississippi exports all that beef comes with a cost.

ANURADHA MITTAL, Executive Director, Oakland Institute: The supply chain of beef from Nicaragua is anything but clean.

NATE HALVERSON: Anuradha Mittal a nonprofit, the Oakland Institute, that investigates land thefts around the world. In a socially distanced interview, she described how she went to Nicaragua after hearing that cattle ranchers are stealing land from Indigenous communities.

NATE HALVERSON: When you got there, what did you find?

NATE HALVERSON: In January, a group of armed cattle ranchers attacked an Indigenous community in Nicaragua, burning homes and killing four men. An Indigenous leader shared these cell phone images that capture the destruction and the funerals in their community.

ANURADHA MITTAL: People are dying from violent land invasions, their lands taken away for cattle ranching, cattle, which then turns into beef, which comes into United States. Yes, people are being killed.

NATE HALVERSON: The Indigenous communities own these lands under a landmark international court ruling 19 years ago. Yet a recent United Nations report reveals that, despite the law, Indigenous people are increasingly losing their lands and their lives to cattle ranchers.

ANURADHA MITTAL: So this violence is escalating.

NATE HALVERSON: Lottie Cunningham is a leader in the Indigenous community. I asked her about the cattle invasions.

LOTTIE CUNNINGHAM, Attorney: That is going to cause us an ethnocide. And, as Indigenous people, we are going to disappear.

NATE HALVERSON: As beef exports have increased to the U.S., so have attacks on these small Indigenous communities, resulting in whole villages being decimated and abandoned.

LOTTIE CUNNINGHAM: In this year, we have more than 10 people in less than seven months murdered already. The settlers, them shot with a gun one girl of 14 years.

NATE HALVERSON: Why would somebody do that to her?

NATE HALVERSON: Is it safe for you?

NATE HALVERSON: The Nicaraguan government is legally obligated to protect the Indigenous people from land invasions. But Cunningham and others say that, instead, President Daniel Ortega's government is cutting ribbons for new slaughterhouses, which buy cattle raised on the stolen lands and sell the beef to their biggest customer, the United States. The Nicaraguan ambassador, who I spoke to multiple times on the phone, declined to sit down for an interview or address the deadly attacks by cattle ranchers. But Senator Mike Rounds, who has been looking into imported beef, told me in a socially distanced interview that most Americans don't even realize they're eating Nicaraguan beef.

SEN. MIKE ROUNDS (R-SD): American consumers don't have any inkling as to where their beef comes from today. 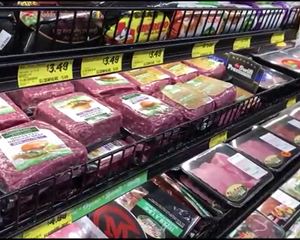 NATE HALVERSON: That's because U.S. beef importers are no longer required to disclose where their meat comes from, after a change in U.S. regulations four years ago.

SEN. MIKE ROUNDS: That's right. The chances are very good that it can contain product from other countries, and that all that happened was, it was brought here to the United States. And, if they slice it up here, they can put a Product of the USA sticker on it.

NATE HALVERSON: Dozens of companies import be from Nicaragua, Thomas Foods is one of the largest, importing beef from some of the same slaughterhouses that Lottie Cunningham said are buying cattle from the ranchers attacking her community. Thomas Foods sells its imported grass-fed and organic beef nationwide to Walmart, Safeway, Target, even Yale University. On its Web site, it claims to track production--quote--every step of the way, literally from the farm to the table. But, in Nicaragua, that's not true. Like other importers of Nicaraguan beef, it buys from the slaughterhouses, not directly from the farmers, and has no way of ensuring where in Nicaragua that beef comes from.

NATE HALVERSON: Well, I'm here at Thomas Foods. The CEO, Michael Forrest, has not returned my phone calls or my e-mails, but I thought I'd give him one last try to see if we can sit down and hear about Nicaraguan beef imports.

NATE HALVERSON: Michael Forrest never called back. But I talked to company security guards, who helped track down a different executive.

NATE HALVERSON: I explained to John Cassidy what I'd read in public reports, the murder and violence, and how the Nicaraguan slaughterhouses were sourcing beef from these stolen lands.

JOHN CASSIDY: If we were to find out that there was something that you just explained going on, that would definitely impact our purchasing decisions.

NATE HALVERSON: Who within your company's job is it to make sure that that's not happening in the beef industry?

JOHN CASSIDY: I think that falls all of us as executives.

NATE HALVERSON: So, if Thomas Foods knew that, within Nicaragua, the beef was being sourced from these regions where the Indigenous people, the brown people, the Black people are being murdered, and their land taken from them, you guys would stop buying from Nicaragua?

JOHN CASSIDY: I believe we would, yes. Yes. So, we're not out to exploit anyone.

NATE HALVERSON: Thomas Foods e-mailed me a statement a few days later, saying they will continue to import from Nicaragua because their partners have an agreement that commits to zero agricultural activity in protected areas. I asked for a copy of that agreement. But Thomas Foods declined, saying they would have no further comment.

CAMILO DE CASTRO BELLI, Journalist: If they're saying that there's actually actions being taken, they're lying.

NATE HALVERSON: Camilo de Castro Belli, a veteran Nicaraguan journalist, said the Indigenous communities and the cattle companies did discuss an agreement, but it fell apart.

CAMILO DE CASTRO BELLI: There's no agreement. The cattle industry has been basically worried about their bottom line. And they haven't taken any concrete actions.

NATE HALVERSON: De Castro recently filmed these cattle being raised on the same Indigenous lands that Thomas Foods said that agreement was supposed to protect. De Castro said U.S. retailers need to take a closer look at their supply chains.

CAMILO DE CASTRO BELLI: They are being complicit with a system that is hurting people, which is killing people.

NATE HALVERSON: I reached out to Walmart, Safeway and Target. Safeway's parent company said they bought beaf from Thomas Foods this year because of the meat shortages. Walmart declined to comment. And Target denied selling beef from Nicaragua. But when I sent details about Thomas Foods' import records, the retailer declined further comment. I asked Lottie Cunningham what she would have Americans do about Nicaraguan beef.

NATE HALVERSON: But American consumers can't make that choice until they know where their beef comes from. And so, for now, the cattle ranches in Nicaragua are expanding, and the killings continue. For PBS NewsHour and Reveal, I'm Nate Halverson.