President Trump and his wife Melania have tested positive for the coronavirus. Mr. Trump treated that they were starting their quarantine and recovery process immediately, and we'll get through this together. In her own tweet, the first lady said they were feeling good. The White House doctor said the couple would remain in the White House to convalesce. Hours earlier, one of the president's closest advisers, Hope Hicks, tested positive for the coronavirus. Ms. Hicks travelled with Mr. Trump aboard Air Force One this week. 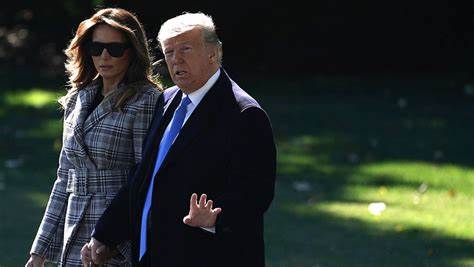 Our correspondent David Willis says Mr. Trump will have been with many people over the past week. We know, for example, that President Trump has been in contact over the last few days with people such as his advisor, Stephen Miller, Dan Scavino and his son in law, Jared Kushner, his daughter Ivanka Trump，Kayleigh McEnany, the White House spokeswoman and Mitch McConnell, not to mention Amy Coney Barrett, who is his nominee for the vacant seat on the Supreme Court. So this is gonna throw a lot of questions into the air. I think the White House is going to be answering them on a daily hourly basis from now on, practically. But it caused a lot attention on Mike Pence now, because what could happen, of course, to the president. He has tweeted in the last few minutes to say, Karen, that's his wife and I send our love and prayers to our dear friends Donald Trump and Melania Trump. We join millions across America and praying for their full and Swift recovery. God bless you, President Trump and our wonderful first lady Melania. And all of this raises questions about what his role is now going forward. It depends of course on what symptoms President Trump exhibits at the moment according to his personal position. He is not exhibiting symptoms, but of course we know that can change, and he is a 74-year old man who is overweight and in a high risk category. David Willis.

There's been a swift international reaction to the news. The Indian Prime Minister, Narendra Modi, has treated his best wishes to the president and Mrs. Trump. A French government spokesman said it showed the virus spared no one, including those who shown skepticism. President Trump's condition throws the presidential election into confusion. He's been due to address an event in Florida on Friday, but instead, it appears he'll now hold a virtual conference on COVID-19 support to vulnerable elderly people. Global equity and futures markets have dropped after President Trump's announcement. Futures for Wall Street's SNP 500 fell by 2% during afternoon trading in Asia. Tokyo's benchmark Topix Index dropped 1%. In London, the FTSE 100 Futures index also fell.