JUDY WOODRUFF: And finally tonight: As we approach the election, there's a refrain of how divided the country is, culturally and politically. And some of the starkest differences are between urban and rural areas. Now a singer-songwriter from Western Kentucky is hoping her music can help us find some common ground. Jeffrey Brown reports. It's part of our American Creators series and our ongoing arts and culture series, Canvas.

JEFFREY BROWN: S.G. Goodman's debut solo album draws from her experience growing up as a farmer's daughter in Western Kentucky in Hickman, a town of 3,000 people on the Mississippi River. Her songs are often a poignant critique, both of how outsiders view rural communities and of the social, political and economic systems that have shaped the lives of her family and neighbors.

S.G. GOODMAN, Musician: I take it very seriously to represent my home and the people there in a respectful manner. Oftentimes, I feel like people who write about the South want to just keep pushing stereotypes that does nothing really to capture the true essence of the South.

JEFFREY BROWN: That focus on authenticity is also reflected in the album's raw sound.

S.G. GOODMAN: My philosophy when it comes to recording is, you're truly capturing a moment in time, and we are raw, and we are gritty. And I wanted to make sure that people, when they heard my music, they heard us. This is the storefront of our local record shop, Terrapin Station. Here it is in all its glory.

JEFFREY BROWN: The 31-year-old Goodman now lives an hour east of her hometown in the small college town of Murray, population 19,000. We got a virtual tour, including the local music scene mecca.

S.G. GOODMAN: When I was a freshman in college, I'd made a C.D., and I dropped off my C.D. to the manager here. And I told him. I said, just stick a C.D. in everybody's bag as they leave.

JEFFREY BROWN: That was one way of getting yourself heard, I guess. 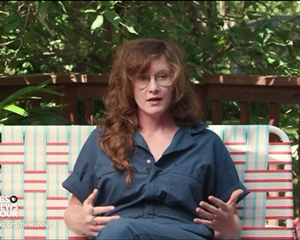 S.G. GOODMAN: I do have a lot of DIY roots. So that was my genius marketing plan at the time.

JEFFREY BROWN: These days, she makes a living through music. And she made a decision to stay in Western Kentucky, even when it hasn't been easy. She's gay and politically liberal in a county that is overwhelmingly conservative.

S.G. GOODMAN: There's multiple reasons why it would benefit me to move to a more urban area, a more progressive area. But I feel like the only way for the South and rural areas to change and to progress is for people to stay and live out those beliefs.

JEFFREY BROWN: It's a sentiment heard in her album's title track, Old Time Feeling. Goodman says her Southern roots make people more receptive to her views and her criticisms than they would be to an outsider's.

S.G. GOODMAN: Actual farmer's daughters, they're a rare breed these days. I can sit down at a diner in the middle of Mississippi and probably fit right in, and people wouldn't immediately peg me as a progressive.

S.G. GOODMAN: The South is a complex place. Southern pride is a complex issue. I'm definitely proud of where I'm from and the people who surround me. But, at the same time, there's definitely some generational cycles that need to be broken, interrogated, and also not held at such high regards.

JEFFREY BROWN: It's a debate playing out in Goodman's own town. A Robert E. Lee statue that stands in the town square outside the county courthouse has sparked protests and counterprotests.

S.G. GOODMAN: Many community members and myself find it offensive, and we feel like we could come to some sort of compromise by at least having it removed from such a public place.

JEFFREY BROWN: Bringing out an album is, of course, difficult amid the pandemic. A tour to promote it had to be canceled. Still, it's given Goodman another reason to appreciate her home.

S.G. GOODMAN: For once, I got it right, living in a small town with nature around me.

JEFFREY BROWN: Now you have a lot of people wanting to leave the cities to come to a place like where you are.

S.G. GOODMAN: Houses are cheap here. Come on down, you know?

JEFFREY BROWN: And if not in-person, then visit through song. For the PBS NewsHour, I'm Jeffrey Brown.

JUDY WOODRUFF: And What a beautiful voice.