His son had been a volunteer in the army when he died: this is the reason why the head-master always goes to the Corso to see the soldiers pass, when we come out of school. Yesterday a regiment of infantry was passing, and fifty boys began to dance around the band, singing and beating time with their rulers on their bags and portfolios. We were standing in a group on the sidewalk, watching them: Garrone, squeezed into his clothes, which were too tight for him, was biting at a large piece of bread; Votini, the well-dressed boy, who always wears Florence plush; Precossi, the son of the blacksmith, with his father's jacket; and the Calabrian; and the "little mason"; and Crossi, with his red head; and Franti, with his bold face; and Robetti, too, the son of the artillery captain, the boy who saved the child from the omnibus, and who now walks on crutches. 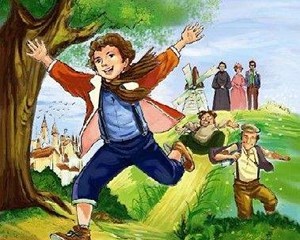 Franti burst into a derisive laugh, in the face of a soldier who was limping. But all at once he felt a man's hand on his shoulder: he turned round; it was the head-master. "Take care," said the master to him; "jeering at a soldier when he is in the ranks, when he can neither avenge himself nor reply, is like insulting a man who is bound: it is baseness." Franti disappeared. The soldiers were marching by fours, all perspiring and covered with dust, and their guns were gleaming in the sun.